(the book not the song)

We will be releasing our first single in less than a week, on 17 January. It’s called Men & Books and it’s a sort of love song to a book. A few years ago, a copy of a book by that name was given to Rod by a German philosopher/gardener, who had built a cedar room in the garden. But that book was subsequently lost. More on that later – we’ll write about the story of the book behind the song.

Recently we managed to track the book down again, on eBay, and bought a couple of copies. Today we are setting the first copy free, releasing it into the world to celebrate the soon-to-be-released song it inspired. We have passed the book to someone and asked them to take a photograph and post it on social media, tagging @oreillyandvincent1 on Twitter or Instagram and maybe the hashtag #menandbooks. It will be interesting to see where the book travels to. We will keep an eye on its journey, two eyes, as often as we can spare them.

The copy of Men & Books is already more than a hundred years old, and we can only imagine its journey so far – through dusty bookshops, scholarly book-lined studies, or standing anonymous in the ranks of libraries, before it wound its way onto eBay and into our hands.

We hope that some of the people reading this might find the book in their hands, take a photo and record its continued march in time. It will start its journey in Dublin where Finn lives. Please let us know where it travels.

And then the song. Men & Books is available for pre-sale on all major digital stores and will be released for streaming and download on 17 January 2020. 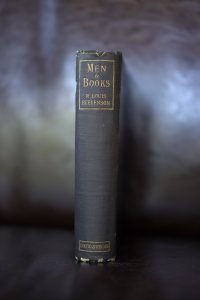