Men & Books – First Single Released – The story behind the song

After all the hours in the recording studio last summer. After all the mixing and mastering. It’s here. Men & Books is available on Spotify and all major digital platforms.

A few years ago, when we lived in Ealing, a letter dropped through our postbox. It was handwritten and ornately illustrated with flowers and ivy round the margins. The writer said that our garden was lovely but he couldn’t help noticing that it needed a bit of attention and he’d like to give it some love. In truth the garden was a total tip. My partner said she thought he sounded a bit dodgy but I insisted that, as he’d gone to all that trouble, he deserved to get some work.

The writer turned out to be a German philosopher called Johannes. He had been studying philosophy at London University. Before that he had run a book shop in Germany. He was quite an unusual gardener.

We became friends and would spend time in the garden talking about philosophy and books.

After he’d sorted out the garden, Johannes offered to build a cedar room where I could write my poems. He took on that job with the same meticulous care and spent months just digging the foundations. We don’t live there anymore; when we sold the house I was saddest to say goodbye to that cedar house. Long after every other building in West London has been reduced to rubble, that summer house will still be standing.

When Johannes eventually finished building it we held a “shed-warming party”. He was the guest of honour and got so drunk he ended up sleeping in a ditch on the way home. At least that’s what he told me. I can’t remember seeing any ditches in Ealing. Forgive me Johannes, if you ever read this. It was a great party.

At the party he also gave me a present. An ancient black book called Men & Books. It had gold debossed lettering on the spine and roughly cut pages. I was intrigued by it – its venerability and that odd title. It seemed to be precious and I wondered why Johannes had chosen it for me.

One of the first things I wrote in that summer house in Ealing was a kind of love poem to the book. That eventually evolved into the lyrics for the song. That part of the story happened one weekend in April 2019 when Finn came to visit us in our new place in Shropshire. He picked up a pile of my discarded poems and started strumming on an acoustic guitar and then started to sing to them. That was incredible to watch. He’s a wonderful songwriter with a beautiful voice.

We moved out of the house in Ealing a few years after Johannes built the summer house. In the move I lost quite a few precious items, including Men & Books. I had never actually read it. All I had was the draft of the poem about it.

When Finn magicked the poem into a song in April last year,  I searched again for the book. It took a while but I discovered that it’s by Robert Louis Stevenson and it’s a series of essays about literature (with the sort of title I hope nobody would use today). I bought copies on eBay but still haven’t read it. I don’t know if I ever will.

When we recorded the song I wanted it to have a trumpet solo. But we didn’t have a trumpeter. Here’s Finn recording the keyboard solo we used instead. One of our dreams would be to play it live some day with a real breathing trumpeter. 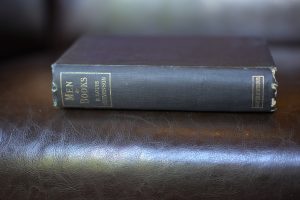